Like millions of other people, I went to see Mad Max: Fury Road this weekend. I had seen some trailers but had not read any reviews so I entered the theater with almost no preconceptions whatsoever. I was predisposed to like it, however. I’m a fan of apocalyptic/dystopian movies, and I’m really into the aesthetics of deserts right now. Plus, Mad Max: Beyond Thunderdome was a formative film of my childhood. Was there anything cooler than Tina Turner singing, “We Don’t Need Another Hero” in her chain mail dress and with that awesome mane of hair? No, there was not.

I’m happy to say that Fury Road totally delivers; it is a visually stunning chase movie, frenetic and riveting from beginning to end. Its characters are fully realized even though they say almost nothing – especially the film’s central protagonist, who is not Mad Max but Imperator Furiosa (Charlize Theron). We see her first, introduced to a cheering crowd and then taking the wheel of a War Rig – with a prosthetic left arm and hand.

Amputees enter the modern cultural discourse in all kinds of complex ways. During the Olympian double amputee Oscar Pistorius’ trial for murdering his girlfriend Reeva Steenkamp, for example, the nature of his limb loss and the speed with which he could don his prosthetics became essential components of his defense. He felt “vulnerable” without his prosthetics on, his lack of mobility hampering his ability to protect himself and (as he argued) Reeva.

This kind of argument echoed those that Civil War Americans made about soldiers who came home with missing limbs. Because citizenship and manhood were invested in the whole male body, both Union and Confederate veteran amputees faced a series of crises and questions when they returned home from the war. How would they support themselves, their wives, and their children?

Prosthetics were often a partial answer to these questions. A mechanical arm or leg would allow men to work in the fields or factories, and when made well and fitted to the individual, could seamlessly attach to the body in such a way that no one would ever tell. Or so said the manufacturers, who published thousands of pages of illustrations and affidavits attesting to the quality of their prosthetics, their excellence in both function and form. 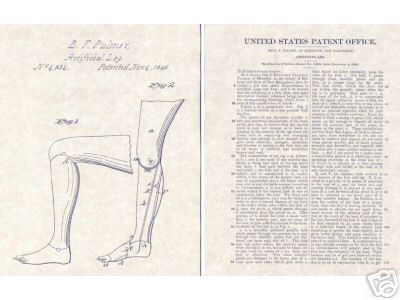 For Civil War Americans, amputation and prosthetics were topics of conversation in private and in public. Newspapers published poems, stories, illustrations, and political cartoons that addressed these issues. For a while, during the war and for some years after, everyone was talking about amputees.

What is so striking about Furiosa’s missing arm and her prosthetic in Fury Road, however, is that no one talks about them. How did she lose her arm? Did she build her own prosthetic? These questions are never asked, nor are they answered. You get some hints – there are other denizens of the Citadel with missing arms and legs, most of them men. Perhaps Furiosa was born without the arm, perhaps she lost it in a fight. It hardly matters to the plot of the movie; and Furiosa herself is not at all concerned about it. She uses the prosthetic to grip the rig’s wheel or to fire a weapon; she punches men in the face with it. Sometimes she sheds it entirely and wields her stump as a weapon. It’s all completely natural.

Many cultural critics have seen this characterization as empowering — particularly because Furiosa is female amputee. As Leslie Wolfe has argued, disabled women “live at the corner of disability and womanhood – with two ‘minority’ identities, a double dose of discrimination and stereotyping and multiple barriers to achieving their life goals.” As a cultural representation of the disabled female body, Furiosa upends stereotypes of weakness and dependency.

As amputee Laura Vaughn notes in her Tumblr, “The effortless manner in which this film has presented a character’s disability is incredible. I literally could not ask for anything more. It’s ubiquitous. No big deal. Her body is never a plot point. It is simply allowed to be.”

Furiosa shares this “effortless” adaptation to her missing limb with another ass-kicking film character – Gazelle (Sofia Boutella) in Kingsman: The Secret Service (2014). 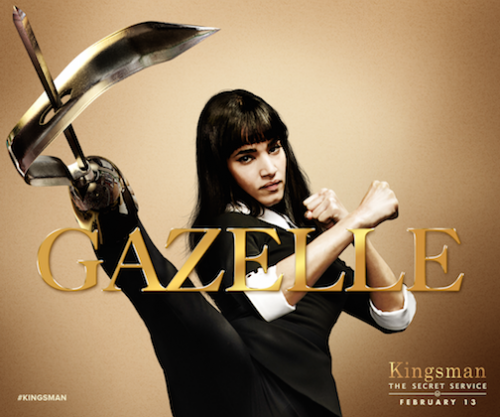 In her first scene, you do not see Gazelle. You hear her: it is the sound of her prosthetics – gleaming steel swords imbedded in Cheetah blades – cutting through a man like butter. Throughout the film, she dispatches the villain Valentine (Samuel L. Jackson)’s enemies using speed, agility, serious martial arts skills – and her prosthetics. As in Fury Road, no one ever asks or comments on Gazelle’s missing limbs in Kingsman. We never know how she lost her legs or where she acquired her lethal prosthetics. Like Furiosa, Gazelle’s body is “simply allowed to be.”

Gazelle does meet her end [SPOILER ALERT] in a way that references the double edges of prosthetics, however. During hand-to-hand combat (Taron Egerton) manages to slice her with a blade hidden in his own shoe – its poisoned edge kills Gazelle within seconds. Eggsy then uses one of Gazelle’s legs to kill Valentine, throwing it like a javelin.

The women’s prosthetic-as-weapon has film precedents – most notably Red Harrington (Helena Bonham Carter)’s ivory leg with an imbedded pistol in the heel in The Lone Ranger (2013) and Cherry Darling (Rose McGowan)’s machine gun prosthetic in Grindhouse (Planet Terror) (2007). Interestingly, in both of these films the characters do talk about their missing limbs; both Red and Cherry have lost their legs to violent, sadistic men and they are hell-bent on revenge. 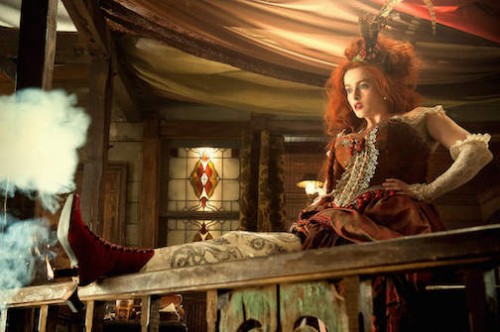 The prosthetic-as-weapon does not have such direct historical precedents, however. During the Civil War and after, some veterans’ prosthetics were made out of the same kind of wood as rifles – and sometimes they were manufactured in former munitions factories. In these cases, the materials that took their limbs rebuilt these men. But these prosthetics were never imagined as having any use as weapons after the war; these technologies were meant to help veterans live their lives, not take them. 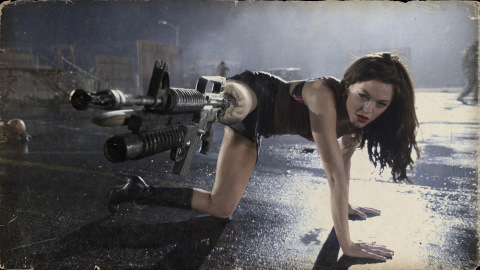 So should we see all of these amputee action heroes as feminist symbols? Furiosa’s driving ability has made her a leader among her people – a status usually reserved for men. Gazelle, although she dresses like a demure secretary (white button-down shirt, three-quarter-sleeve black sweater), is clearly the most lethal assassin in the world. Red is an entrepreneur, running the den of iniquity Hell on Wheels as it rolls through the West. And Cherry is an exotic dancer when she loses her leg; her turn to vigilante violence with her machine-gun leg puts her at the center of a man’s world in a different way entirely. Cherry is the most sexualized of these women; the others are not involved in any romantic plots, and their power comes not from sex but from their mastery of their own bodies, bent to their own ends.

However, it is extremely problematic that to be powerful, these women must experience losses that are both corporeal and emotional.

In the end, though, it is refreshing to see such female characters, Furiosa and Gazelle in particular, in somewhat unexpected genres: science fiction, western, spy, and horror. They kick ass without apology or comment, and they convince us that the power they wield is real.

2 thoughts on “Furiosa, Gazelle, and the Power of Prosthetics”