Hi there! I’m Megan Kate Nelson, a writer, historian, road cyclist, and cocktail enthusiast with more than 34,000 images on my phone – most of them of my two cats.

I am an expert in the history of the American Civil War, the West, popular culture, and the 19th century more generally, and have written many articles about these topics.

I am the author of The Three-Cornered War: The Union, the Confederacy, and Native Peoples in the Fight for the West, which was published in February 2020 by Scribner. 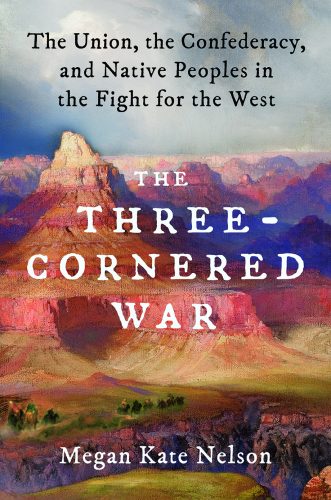 The vast majority of Civil War histories focus on the fights in the east. The Three-Cornered War takes readers to the desert Southwest, where Union and Confederates soldiers, New Mexican civilians, Navajos, and Apaches struggled for control over a vast region filled with valuable natural resources. You can read more about the nine fascinating people whose stories illuminate the complicated history of the Civil War West in The Three-Cornered War here.

I live in Lincoln, Massachusetts with the aforementioned cats and my husband. But I grew up out West in Colorado, and when I was a kid my family took two-week vacations every summer by car, driving all over the United States in search of historic sites, amusement parks, roadside attractions, and national parks.

I embarked on a similar road trip to do research for The Three-Cornered War, driving through the Southwest to read original documents in archives, go to museums, and walk around state and national historic sites.

Southwestern deserts have always challenged the people who have tried to live in them, travel though them, convert them, or eradicate them. These landscapes have long histories of contestation and violence. My desire to uncover these histories —and their connection to broader developments in American culture —drives most of my work.

I will be exploring another of America’s challenging places in my new book project, This Strange Country: Yellowstone and the Reconstruction of America, which will be published with Scribner in spring 2022.