From the moment I started researching ruins, I began to see them everywhere. Sometimes I actively sought them out, especially during vacations: Tulum in Mexico, the Pont du Gard in France, Kaiser Wilhelm Memorial Church in West Berlin. Other times I would run across them by accident – tucked into some corner off a city street, around a bend on a hiking trail. 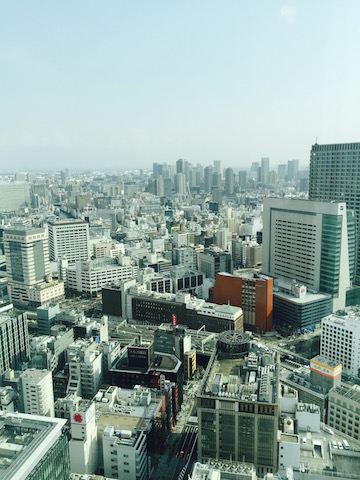 Some places, though, seem to be devoid of ruins — at least at first.

This past week, my husband and I visited Tokyo for the first time. It’s hard to get a handle on the city from street-level; from thirty stories up, the massive city looks like a dystopian novelist’s conception of the urban future: a seemingly endless landscape of towering buildings, white and gray and glassy. Tokyo looks like this today because much of it was destroyed in U.S. bombing raids during World War II; it was reconstructed during the heyday of the International Style in urban architecture.

I was therefore not expecting to find ruins in Tokyo. But during our urban wanderings, we stumbled upon two interesting iterations of the ruin, carefully preserved and protected as reminders of Tokyo’s violent conflicts. 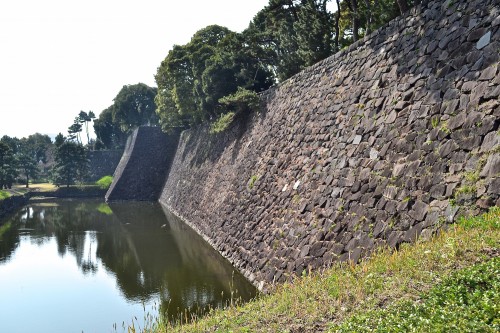 Edo Castle (also known as the Imperial Palace) is a major tourist site in Tokyo; you enter the grounds after crossing a bridge over a wide moat, then walk along paths that pitch abruptly, steeply upwards, passing through gates and towering stonewalls.

Walking through the Imperial Garden makes you realize in your body what you know in your brain: that this place was both a site of governance and a fort. Tokugawa Ieyasu, the first shogun of the Edo government, built it in the early sixteenth century; it was meant to project power (all that walking uphill) and to defend the shogun from attacks. 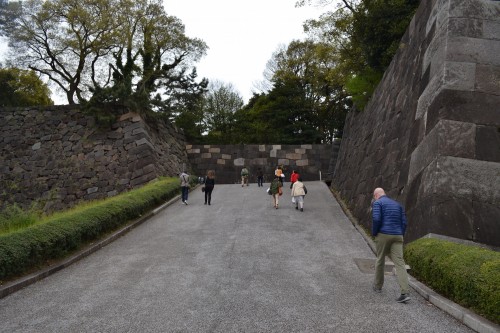 The steep slopes, presided over by guardhouses and protected by the stonewalls, would have slowed invaders seeking to breach the gates; the walls themselves lean slightly inward, serving the same function. Civil War historians will recognize these defensive architecture elements in the earthworks that soldiers built across the South, especially outside of Petersburg and Richmond.

Now, most visitors might not recognize Edo Castle as a ruin – it does not “read” as such in our more Romantic perception of lone marble columns and crumbling stones covered with moss. The buildings here are reconstructions and the walls have been meticulously maintained, patched with new laser-cut stones when they begin to collapse or crumble.

The most recent major overhaul occurred in 2002-2005, when preservationists shored up a section of stonewall between Bairinzaka Slope and Shiomizaka Slope, pictured above. In this the ruins of Edo Castle have much in common with other sites of “maintained destruction” – the memorial at Oklahoma City, for example, or some of the Abbey sites in England.

The Flame of Hiroshima and Nagasaki

Ueno Park is another popular tourist site, especially during cherry blossom season, when hundreds of trees in the park bloom for only ten glorious days. Japanese and foreign tourists flock here to see this natural wonder, along with several Edo-period structures that miraculously survived U.S. bombing raids – especially Toshu-gu shrine, and its Sacred Tree, a six-hundred-year-old camphor. 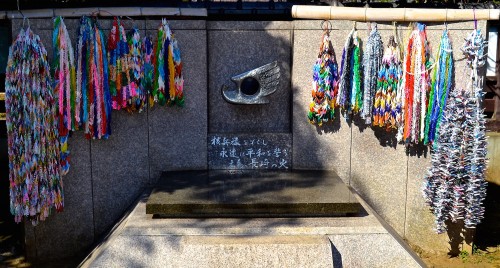 Along the walkway to Toshu-gu, off to the side, there is a small stone monument, simple and modern its lines, with what looks like a flaming eye in its center. A closer look reveals that the bas-relief sculpture is a dove of peace – and that it does indeed contain fire. 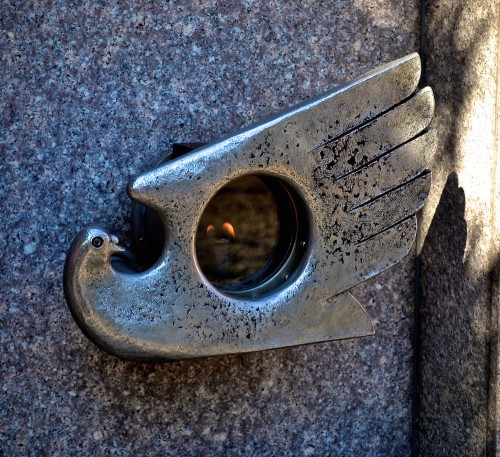 The story the monument tells is this: in the weeks after the U.S. bombing of Hiroshima, a man named Tatsuo Yamamoto went to that devastated city to try to find his uncle; what he found instead was the his uncle’s house in ruins and a fire still burning within it. He preserved this flame (how exactly he did this is unclear) and in 1990, it was merged with a flame lit from the friction of rubbing together two broken roofing tiles found among the ruins of Nagasaki. This “A-bomb flame” is meant to both commemorate the destruction of World War II and to serve as a symbol of a local movement to abolish nuclear weapons.

There are several things that strike me about these Tokyo ruins:

2 thoughts on “Finding Ruins in Tokyo”