There’s been a lot of talk lately about how and why academics should write for “public audiences.” By this we usually mean that academics turn from the usual professional audience (fellow historians, in my case) and seek to engage non-academics who have an interest in the subject at hand.

This discussion – and all of the assumptions that lie behind it – makes a fairly strong distinction between “public writing” and “academic writing” in terms of:

So far, the turn to public writing has been conceived as one-directional. Academics go out into the public and therefore write differently. By why are academics so loath to turn back around and write differently for one another?

I’ve been thinking about this for a while, as I’ve started to tackle a book project with an unusual (for academic writing) structure – character-based, chronological – and as I have been writing a shorter piece, a travel story for a popular magazine. Both demand that I step outside my writing comfort zone (which is definitely in the academic tradition) and experiment with storytelling as argumentation.

And then a few weeks ago, I happened upon a series of tweets from participants in the “High Stakes History” conference at Columbia University. During Jill Lepore’s keynote in the afternoon, @MLAconnect the following synopsis of one of Lepore’s points. 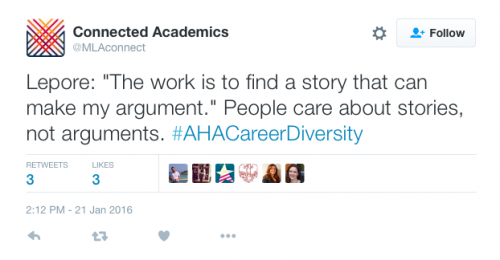 The tweet, and my retweet of it with the admonition “stories, not arguments, people” attached, prompted a vigorous Twitter debate about why we believe story and argument to be in tension in academic writing.

We didn’t get too far in this debate – it was Twitter, after all. Historian and Omohundro Institute Director Karin Wulf subsequently wrote a blog post for The Scholarly Kitchen, arguing for the importance of argument in academic writing. “The question,” she wrote, “Ought not be one versus the other. Academic writing is expository.” However, “for academic writing, argument is essential, and narrative is optional. […] pure narrative can never substitute for argument in professional exchange.”

For Wulf, “academic writing” hews closely to the descriptions I have laid out above, in form, structure, and venue. It constitutes a “professional exchange” that requires argument-driven prose, historiographical engagement, and an assertion that what the scholar is writing about – the knowledge the scholar is creating – is new.

This is not unreasonable, nor unexpected. This adherence to “academic writing” style is based on the reality that academics must write for one another, engage in the “professional exchange,” in order to remain academics – to secure jobs and then get tenure. Most tenure committees do not recognize public writing as “scholarship” worthy of inclusion in the hiring or tenure file and so academics must write the articles and books that journals and university presses usually expect to publish.

As long as these are the expectations of academic writers, academic writing will do what it is supposed to do – create new knowledge – but it will continue to be predictable. And only a handful of others besides academics will read it.

So what is there to do? Is there any possibility that journals and presses – and job search and tenure committees – will accept (or even embrace) “creative academic writing”: work that is rigorously researched but that takes risks in terms of prose style, structure, or approach; pieces that make use of multiple points of view, subvert standard chronologies of story-telling and argumentation, or combine genres in new and interesting ways.

It is true that university presses have long published narrative histories, and some books that experiment with structure. Yale University Press, for example, has recently published Aaron Sachs’ Arcadian America, which interweaves cultural history and memoir, and Martha Hodes’ Mourning Lincoln, which separates analytical chapters with short (also analytical) “interludes.”

And some academic journals do give space to shorter pieces of creative academic writing. For example:

These journals are providing excellent opportunities for scholars to experiment with form and style. But with the exception of ANCH‘ and RH‘s articles, these pieces appear in separate sections and sometimes at the end of the journal (although J19 places Pleasure Reading pieces up front). This effectively “silos” creative academic writing, highlighting its differences from academic writing, and reinforcing the dichotomy that the folks involved in the Twitter conversation about “story vs. argument” dream of avoiding. 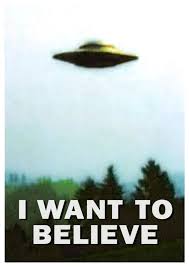 This will require, however, a massive shift in the way that academics think about themselves, and the nature of their “professional exchange.” It will require that academics — writers, editors, publishers, administrators — embrace new forms of scholarship as legitimate. And they should do this. Because this kind of risk-taking is what will produce new ways of thinking about the past.

30 thoughts on “Is There a Future For Creative Academic Writing in Academia?”