You haven’t heard from me in quite a while. It appears that most people prefer to do their complaining about students and colleagues in private. That’s fine with Mr. Wolf, it just means he’s a little bored.

But now it is conference season, Mr. Wolf’s favorite time of year. So. Many. Colleagues. Behaving. Badly. Plus! Pumpkin spice lattes.

Finding inspiration from the good folks over at McSweeney’s, Mr. Wolf has developed his own bingo card, for the 2015 Southern Historical Association Meeting, which convenes later this week in Little Rock, Arkansas.

If you’re going to Little Rock, print out the card and play along.

If you’re a Twitterstorian, mark your squares with tweets using the hashtag #SHABingo. 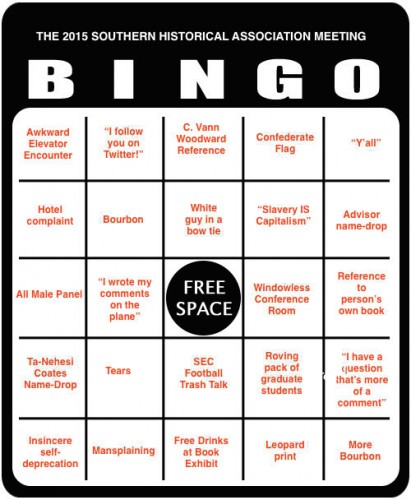 Mr. Wolf is the nom de plume of a small group of historians who think it is about time they unleashed their inner Wolves on people behaving badly.

H/T to Quentin Tarantino for the inspiration.