As the cries and staccato chants from protestors echo in the streets of Boston, Francisco Rodriguez—a father of two American citizens, small business owner, honest tax-payer, and aspiring American—sits nervously by himself in the Suffolk County House of Corrections. He is awaiting deportation to El Salvador, the country he fled from, in fear for his life, in 2006.

Rodriguez has made the most out of his opportunity in America. Rodriguez found work and then started his own small business, providing work for others. A believer in the American dream, he has taken an active role in his children’s education and takes it upon himself to teach them the value of hard work. Francisco Rodriguez is one thread in our large, diverse American tapestry. However, that tapestry is currently being ripped to tatters.

On Thursday, July 13, Rodriguez traveled to ICE headquarters in Burlington, MA for a meeting with agents. Since his arrival in the U.S., Rodriguez has met with immigration officials annually, hoping to be granted asylum. This year, ICE agents told him to come back with flight reservations and travel itinerary for his return to El Salvador. After he arrived with friends and family on the 13th, ICE agents led Rodriguez inside to prepare him for deportation. The Trump Administration had clearly determined that Francisco Rodriguez is a “bad hombre,” and must be deported. 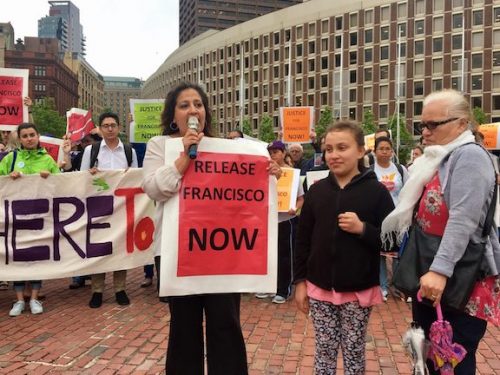 When Trump first used the term “bad hombre” in a debate with Hillary Clinton in October of 2016, reactions varied. Many found it to be humorous, yet others found it to be disgusting and downright frightening. It appears that under this new presidential administration, using derogatory terms to describe members of racial and ethnic minority groups has again become commonplace.

This rhetoric turned to action when Donald Trump appointed former Breitbart News chairman, Steve Bannon, as the White House Chief Strategist, that a dramatic shake-up would soon take place. Thought by many to be a xenophobe and jingoist, Bannon did not surprise when he influenced Trump to sign an executive order banning Muslim immigrants from selected countries only one week into his presidency. When millions were reeling from this shock-and-awe event the Trump administration continued their legal assault on all “illegal immigrants” in America.

For many Bostonians, these protests against unlawful deportation are an echo of the past.

The narrow streets of Boston echo with the chants of protestors. A “fugitive” is confined to the steel bars and cement walls of the city Court House in Boston. Anthony Burns, a nineteen-year-old runaway slave from the state of Virginia, awaits the verdict in his deportation case. 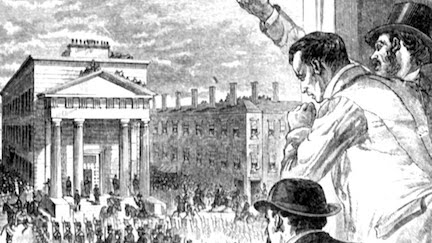 On May 24th, 1854, three months after Burns successfully stepped off his freedom ship on to the wharves of Boston, he was arrested by a federal agent and confined on the third floor of Boston’s federal court house. Under the Fugitive Slave Act of 1850, which made northerners responsible for returning fugitive slaves to the South, it was declared unlawful for Burns to be in Boston and he was to be deported back to Virginia.

Over the course of the next week thousands in Massachusetts rallied to aid Burns despite the warnings and threats of federal agents, including America’s president, Franklin Pierce – a northerner from the state of New Hampshire.

Massachusetts Senator Charles Sumner delivered a withering public address against the recent passage of the Kansas-Nebraska Act and abolitionists Wendell Phillips, William Lloyd Garrison, and Henry David Thoreau spoke out eloquently and vehemently against the actions taken towards Burns—a man that they saw as a free and skillful able-bodied contributor to society.

Both sides—protestors armed with knives and federal agents reinforced by armed military units sent into Boston’s streets with approval from President Franklin Pierce—violently attacked each other. The ensuing clash left one dead and many injured. Pierce then wrote to a federal marshal in Boston, “your conduct is approved. The law must be executed.” 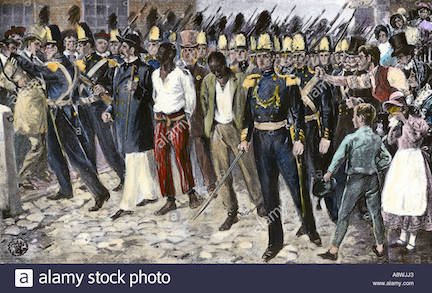 Despite the public outrage in Boston, the federal government held firm to their belief that Burns was a fugitive and, in accordance with the Fugitive Slave Law, the only option was to return him to Virginia.

On June 2nd, 1854, Burns was shackled and paraded, surrounded by federally appointed armed military men, to the Boston wharf where his transport ship was docked waiting to carry out the final instruction from the federal court.

Both Rodriguez and Burns feared for their lives in the places they were raised. They dreamed of escaping to a land of liberty and opportunity. For both men, that place was Boston, Massachusetts, a city usually seen to be a bastion for liberty, opportunity and security.

Both men are/were ambitious, self-sufficient, and determined – attributes that allowed them to successfully navigate their escapes and settle in Boston. These men found work immediately, proving their skills and contributing to their communities.

Both men found no support from their presidents; both Pierce and Trump stuck to their base and ignored the subjective calls for morality. But their situations did rally Boston residents, who felt that it was only the color of their skin and their place of birth that these two men were guilty of.

It is imperative that we, as Americans, be self-reflective and see the injustice that is being done to the Rodriguez family and the implications and consequences that could result from his deportation, and the deportations of millions of others.

Bostonians must continue to protest. They must strengthen their resolve to never normalize hate and fear. Their chants must get louder. They must force President Trump to reassess the short-term and long-term value of recklessly removing individuals from America based on immigration status rather than merit and contribution to society.

As Burns was transported to the Boston wharf for deportation in 1854, a Boston lawyer working in his office watched and “put my face in my hands and wept.” I hope that we will not have such cause to weep as Mr. Rodriguez is brought to Logan airport to board a flight for El Salvador.

At the time of the Burns trial, Henry David Thoreau gave a speech entitled “Slavery in Massachusetts.” In it he said, “I wish my countrymen to consider, that whatever the human law may be, neither an individual nor a nation can ever commit the least act of injustice against the obscurest individual without having to pay the penalty for it.”

If the United States federal government deports Francisco Rodriguez, all Americans will pay the penalty, and know that we were on the wrong side of history.

Chace Howland, a high school history teacher living outside of Boston and a student of the past. Chace holds a Master’s degree in American History from Providence College. You can find him on Twitter @Chacehowland_20 or via email: Chacehowland1848@gmail.com