Like many historians, Donald Trump’s election has caused me to fret over what, if anything, I can do to stop his destructive agenda and counter his profoundly un-American style of politics. Since November, I’ve lost a fair amount of sleep, spent more time on Twitter than promotes mental health, and not made meaningful headway in my research agenda.  I know I’m in good company: Trump’s presidency has put millions of Americans into a state of anxious uncertainty. 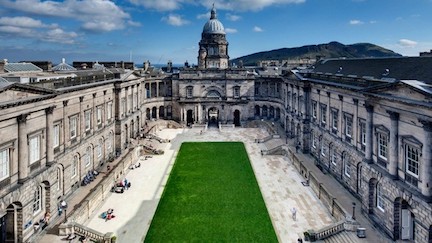 One of the factors contributing to my anxiety is the physical distance between my current home and the United States.  Three and half years I moved to Scotland. After living my whole life in America, I took a position teaching American history at the University of Edinburgh.

In almost every possible way, this is a dream job: the students are brilliant, my colleagues are supportive, the University has resources. I get to live in one of the most beautiful and historic cities in the world. The healthcare is amazing and I have no fear of gun violence. I can see a castle and an (extinct) volcano from my bedroom window. I have a 5-minute walk to work. I have nothing to complain about.

Nonetheless, witnessing the 2016 campaign from 3,000 miles away proved disorienting. So much of that campaign violated what I thought I knew about how American politics worked. I began to wonder if living overseas had alienated me from whatever tenuous connection I once had with the American zeitgeist. It just didn’t make sense.

I went into election night fully expecting Hillary Clinton to emerge victorious. After all, the polling from Nate Silver on down had lulled me into a sense of historical inevitability, and Trump seemed like such a categorically unqualified and loathsome candidate that I expected a Clinton landslide. I spent that night with several of my colleagues in the Student Union, where we broadcasted hourly election updates as part of a MOOC we were running on the history of presidential elections. Because of the time zone difference, the early returns from the east coast didn’t come in until midnight. By 4am, we had basically concluded that we had no historical framework to draw upon for what just happened. I remember leaving at 6am, wondering about whether Trump’s election made the republic worth saving.

My mind went to some pretty dark places (for those familiar with my scholarship, I often go to dark places). Could the polar ice caps survive four years of a Trump administration? Abortion rights? Gay marriage? Gender and racial equality? America’s already anemic social safety net? The list of potential disasters seemed overwhelming.

What made my despair particularly acute was that I felt there was little I could do to resist and fight Trump’s poisonous agenda from outside the United States. Were there any kind of meaningful actions I could take from Edinburgh?

I decided that there were.

First, I did all the things that any American citizen can do. I wrote and called my congressional representatives (I vote in North Carolina, my last place of residence before moving to Scotland). I signed dozens of petitions and public letters. I gave to the ACLU. In times like this, every voice and dollar matters.  Even if I can’t run for elective office or attend town hall meetings, I can still contribute to the health of our democracy. 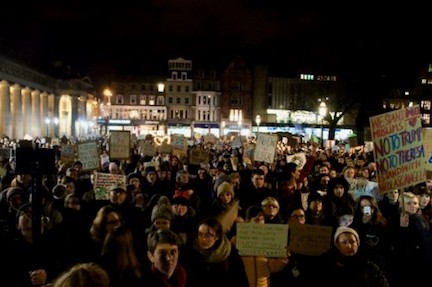 Second, I joined the protests in Edinburgh. Even though (and maybe because) he owns two golf courses here, Scots loathe Trump and have been animated in their opposition to his policies and politics. As part of the global Women’s March, I joined thousands of protesters, who amassed outside the American Consulate in Edinburgh. A week later, I also joined a much larger and angrier crowd of protesters, who marched on the Scottish Parliament, decrying Trump’s refugee ban. More protests are planned for the future. I’ll be there.

Third, with my colleague Frank Cogliano, I started a podcast, The Whiskey Rebellion, to provide historical context for the Trump administration. We recorded our first episode right after the inauguration and plan to do them weekly, responding to whatever horrors come out of the White House.

I have no illusions that any of these steps will topple the Trump administration or even move the needle slightly. Remaining silent, however, is not an option. Trump and his minions can’t ignore the chorus of dissent and the marching of protesters forever. At the very least I can go to sleep at night, knowing that I’ve done something.

David Silkenat teaches at the University of Edinburgh. He is the co-host of the Whiskey Rebellion Podcast. He is donating royalties from his new book Driven from Home: North Carolina’s Civil War Refugee Crisis to help those hurt by Trump’s refugee ban. You can reach him on Twitter at @davidsilkenat.