As I settled into my seat with my notebook, pen, bag of popcorn, and Junior Mints, I muttered to myself, “Please let this be good.”

I was in the movie theater, with about twenty other people (it was a small theater, one of those “deluxe” places with Barcaloungers, so it was about 2/3 full), to see Free State of Jones, a new feature film about a group of Confederate deserters, fugitive slaves, and freed people who made new lives for themselves in southern Mississippi in the 1860s and 1870s.

I had every reason to think that it would be good. 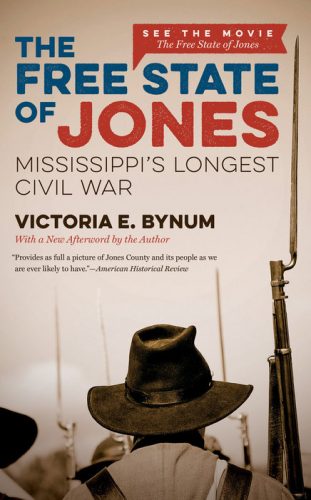 First, Free State of Jones is based on actual events, which Victoria Bynum researched and wrote about in her 2001 book of the (almost) same name, a beautifully narrated history of Newton Knight and his interracial band of renegades, who rebelled against the Confederacy and fought for their rights during the Civil War and Reconstruction.

Second, the director Gary Ross has given every indication that historical accuracy (or at the very least, credibility), was extremely important in the making of the film. He consulted with no fewer than eleven historians, including Bynum, Margaret Storey (who has studied Unionists in Alabama), and Steve Hahn (whose book about black political struggles during this period won the Pulitzer Prize). He has created a website with links to documents and other sources. And he made a video debunking four Civil War myths (now showing on the Huffington Post website).

Third, we’ve been seeing some quality television shows (Roots, Underground, and Mercy Street) and films about slavery and the Civil War lately. 12 Years a Slave and Lincoln, in particular, showed that screenwriters and directors could tell vivid and important stories about the history of nineteenth-century America, and attract big audiences.

When the credits rolled at the end of Free State of Jones, I was happy. It is good. The depictions of warfare are realistic; the acting is compelling; many of the scenes, especially those filmed in the swamps of Louisiana (standing in for Mississippi) are hauntingly beautiful.

The last portion of the film, which tracks the members of the Knight Company during Reconstruction, is stilted. But it is one of the best filmic portrayals of both black political action and the racial violence that followed that I have ever seen.

There are problems, of course. It is a little slow in parts. Only Newt (Matthew McConaughey) and Moses Washington (Mahershala Ali; a fictional, composite character meant to represent the transition to freedom for southern slaves) are truly well-developed characters. The romantic plot – the evolving relationship between Newt and the slave then freedwoman Rachel (Gugu Mbatha-Raw) – feels flat and unconvincing. All of the other black characters are marginalized in the action; we do not even know their names. And I am not a fan of the black-and-white period photographs and expository text that appear every now and again. They interrupt the visual narrative and give the film a Ken Burns-y sort of feel.

But overall, I liked it. I looked around, wondering how everyone around me felt. But my fellow audience members at the 3:00 Sunday show bolted the theater before I could ask. I needed to talk to other people – non-academics, non-Civil War specialists – about Free State of Jones, to see if they agreed or disagreed with my assessment. And so I picked up the phone.

My father, a man who stops at most historical markers on road trips.

My mother, a cinephile who has seen more movies in her lifetime than you ever will. No, really.

“So what did you think?” I asked. They had gone to see Free State of Jones that afternoon, despite the fact that their local paper had given it a terrible review.

Dad: “I thought it was a very good movie. Very interesting history, and a fascinating study.”

They agreed with me that the action was compelling. The marks of historical authenticity in the film – the bloody violence of the battle, the dirty fingernails, the dresses coming apart at the seams – made them feel like they were really there, which they enjoyed.

And while the graphic scenes of death and wounding were hard to watch, they thought such scenes were necessary. “War is just a video game to people now, that’s all it means,” my mother said. They thought that we must see the Civil War’s grim realities more often on screen in order to see its costs (you can see that I come by my dark history tendencies naturally).

The slower pace didn’t bother my parents. They thought that it was necessary to convey all of the complicated backstories, and that it contributed to the realism. They liked seeing both black and white women take part in resistance against the Confederacy. This, too, seemed authentic to them. 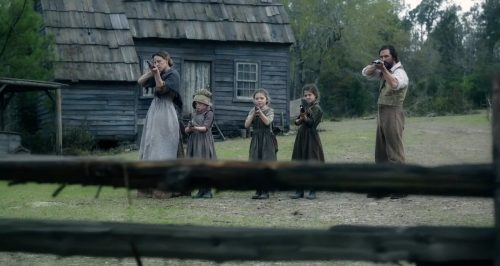 Several elements of Free State of Jones did surprise them (but in a good way): that Serena, Newt’s first wife (Keri Russell) would come back after the war to live with Rachel and Newt; that the Free State of Jones was so far south rather than closer to the border states; and that such a community of renegades could form in the first place. “Where would Newt Knight have developed the willingness to work with slaves and say that they are real men?” my father asked. “That wasn’t real common in the South, was it?”

This points to a central argument of the film: that the “Solid South” was not solid, before, during, or after the war. Some of the Confederate deserters hiding out in the Jones County swamps were racists, and most of the Knight Company members were motivated by self-preservation rather than a sense of racial justice. But there were those who agreed with Newt that the Company’s rebellious actions “ain’t just for us. Black, white, rich, poor. It’s for everybody.” 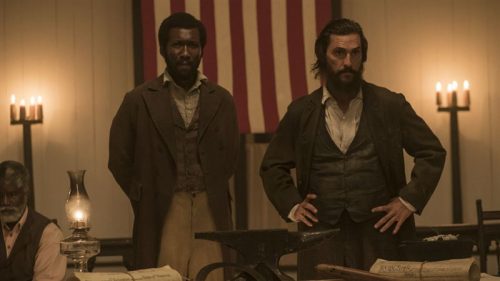 As Vikki Bynum noted in a Q&A with me for the SCWH blog, we need to understand the broad range of white southerners’ experiences during the Civil War in order to understand that conflict and what came after.

“In bringing the story of the Free State of Jones to the masses,” Bynum said, “not only is the image of a white Solid South negated, so also is the agency of Southern dissenters during the era of the Civil War and Reconstruction asserted.”

My parents had never heard of the Free State of Jones or its interracial community before Sunday afternoon. For that reason alone, my mother noted, the film is “a great accomplishment.” And it made all three of us think about the reverberations of the Civil War and Reconstruction today; we went on to talk about its connections to recent acts of racial violence and attempts to restrict voting, across the nation.

In the end, while I gave Free State of Jones 4 cannonballs out of 5 (for the reasons noted above), both of my parents gave it 5 out of 5.

Dad: “I found it very interesting, and a pretty compelling film.”

Mom: “I would actually buy it. And I don’t even like Matthew McConaughey that much.”

A print version of this review will appear in the fall 2016 issue of the “Civil War Monitor.”

17 thoughts on “Watching and Talking About “Free State of Jones””