I first read about Louisa Hawkins Canby in the records of Confederate Texans. She was married to the Union colonel Edward Richard Sprigg Canby (whom she called Richard, although he went by E.R.S. or sometimes Edward in military documents), and was living in Santa Fe when the war began. The Confederates called Louisa “The Angel of Santa Fe,” a reference to the actions she took to help the wounded men of the Sibley Brigade after the Battle of Glorieta Pass in late March 1862.

There were two challenges for me in writing about Louisa Canby.

First, she left almost no records in her own voice. Only one letter in her hand still exists that I know of, written in 1864 after she left New Mexico (it is now in the collections of the Filson Historical Society).

Second, all of the accounts written about her depict a woman without fault, a thoroughly generous and lovely person. She seemed too good to be true. Why is that a problem? Well, people who are too good can seem one-dimensional, and can be difficult to write about for that reason. 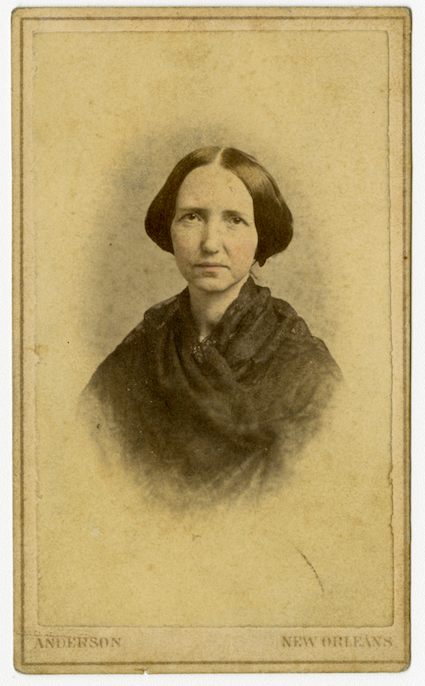 Louisa Hawkins Canby grew up in Indiana, where she first met Richard in the summer of 1837. He was home from West Point and she was about to leave for Georgetown Female Collegiate Institute in Kentucky. They married after she completed her studies in the summer of 1839.

For the next twenty years, the Canbys traveled back and forth between forts and garrisons across the West and U.S. Army headquarters in the East. By the summer of 1860, they were in New Mexico Territory, where Richard was tasked with pursuing the Navajos living in their vast homelands west of Santa Fe and forcing them into a peace treaty.

Once the war began and rumors of John Baylor’s arrival in Mesilla began to filter into Santa Fe, Richard organized the federal troops in the region to defend against the Confederate threat, and left the city to command them. Louisa chose to remain in Santa Fe even when Union troops and federal officials abandoned the city to the Confederates in early March 1862. She was a capable woman, inured to the hardships of the frontier life through her many years as an Army wife, and self-sufficient. She was also lonely, and suffering the sadness of personal loss.

In The Three-Cornered War, readers follow Louisa Canby as she galvanizes the women of Santa Fe to collect supplies in anticipation of a major battle, and then directs the nursing of soldiers in the wake of Glorieta in the late March/early April of 1862.

While her actions earned her accolades from the Texans, she became an object of suspicion among Union officials. It turned out that she was, in fact, good. But she also flouted gender and military conventions enough to be interesting. Women like Louisa Canby have been of increasing interest to historians investigating the “household war,” complicating the distinctions between home front and battlefield in Civil War history.

To tell Louisa Canby’s story, I had to track her through the documents that other people (mostly men) produced about military life in frontier garrisons in the 1840s and 1850s, and in the Civil War West: Max L. Heyman Jr.’s biography of her husband E.R.S. Canby; the E.R.S. Canby Papers and Louise John Speed Papers at the Filson Historical Society; Lydia Spencer Lane’s account of her life as an Army wife, which dovetailed with Louisa’s; the Santa Fe Gazette; and the diaries and war accounts of Confederate soldiers like Bill Davidson (also a protagonist the book, who becomes a patient of Louisa Canby’s in Santa Fe), Alfred B. Peticolas, and William Randolph Howell.