Historians love to make connections between past and present; sometimes it’s a stretch and at other times the parallels are striking. Three weeks into a new presidential administration, and historians have been busy, writing about historical antecedents dating back 180 years.

On February 7th, Massachusetts Senator Elizabeth Warren, and her fellow Democrats, spoke on the Senate floor at length voicing their concern about and opposition to the confirmation of Alabama senator Jeff Sessions for Attorney General.

Warren, always one for flair and impact, read out loud a letter written in 1986 by Coretta Scott King, wife of the late Dr. Martin Luther King, Jr.  The tone was somber and the words powerful. King wrote and Warren read, “Anyone who has used the power of his office as United States Attorney to intimidate and chill the free exercise of the ballot by citizens should not be elevated to our courts.”  King, a woman with deep Alabamian roots, knew Sessions’ past well and was concerned for America’s black community.

When Warren read that line, the Republicans jumped up and shouted. Steve Daines, with Mitch McConnell’s support, argued that Warren was in “violation of Rule 19 of the standing rules of the Senate to impugn another senator or senators any conduct or motive unworthy or unbecoming of a senator.”  Warren shot back that she was simply reading the words written by King. Warren was deemed to have “violated” Rule 19 and was prohibited from speaking on the Senate floor again during the debate over the Sessions nomination. Instead, she read the letter outside the chamber, in a video that went viral.

This event sent shock waves from Capitol Hill. Warren is not the first Massachusetts politician who has been “gagged” on the floor in Congress, however.  Long before Warren,John Quincy Adams, Massachusetts congressman, Secretary of State, son of a president, and sixth president of the United States, was similarly silenced. 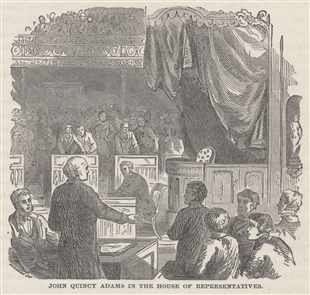 By the mid-1830s the slave debate was intensifying and Congress was arguing over the constitutional legality of the spread of slavery into America’s western territories. In 1836, by the authority of House Speaker, slave owner and future president, James K. Polk, Congress barred all congressmen from presenting any petition regarding abolition. The infamous gag order was supported by all southern democrats and the majority of northern democrats assuring all that the order was there to stay.

For eight years John Quincy Adams defied the gag rule and continued to try to work his way around what he deemed to be a provision antithetical to the constitution.

Although Adams was not an abolitionist—despite his role as representative of the people of Massachusetts, a hotbed for abolition and anti-slavery societies—he was unequivocally a man of morals and law. Adams therefore believed that the gag order should be repealed on the grounds of the first amendment: freedom of speech and freedom to petition.  Throughout the 1830s and 40s, Adams continued to raise the pro-abolition petitions his constituents assembled on the House floor.

In 1844, during the congressional debate over annexing Texas to amalgamate the Slave Power, Adams delivered one of his most scathing rebukes of slavery: “The question is whether a foreign nation…damned to everlasting fame by the reinstitution of that detested system of slavery…should be admitted into the Union with a nation of freemen. For, Sir, that name, thank God, is still ours!”

Southern congressmen interjected with shouts and hisses. “Take your seat!” the House Speaker exclaimed.  Adams fired back, “Am I gagged? Am I gagged?” Southerners shouted to “expel him!” Adams fought on.

Not long after this fracas, humiliated for having been defied and exposed, Congress repealed the gag order in December of 1844. More importantly, Congress again became the arena for American politicians to debate openly and check and balance one another.

This new assertion of a congressional gag order, enacted just a few days ago, risks the subversion of the first amendment within the Senate Chamber. Warren and others will want to consider the actions, writings, and spoken word of John Quincy Adams to help them continue fighting for right and representing their constituents.

Chace Howland is a historian and high school history teacher based in a suburb of Boston, MA. His area of concentration is the mid-19th century (1830s-1870s) and he is currently focusing on the impact of Reconstruction policies on today’s sociopolitical environment. Readers can reach him at Chacehowland1848@gmail.com or via Twitter (@Chacehowland_20).

10 thoughts on “The Resistance Files: Elizabeth Warren, John Quincy Adams, and the Dangers of the Gag Rule”